This very fun piece of circuitry, designed by Art Harrison in 2006, takes advantage of starving a chip to create its hilarious and addictive effect. (Ok its real name is Cacophonator)
The victim here is a 40106 logic chip, which contains 6 Schmitt Trigger inverters wired as 4 (kind of audio frequency) oscillators and 2 LFOs (which are also oscillators in their slow way).
The available current in the chip being limited with the ‘starve’ pot, these oscillators start to – kind of – fight against each other to achieve their own oscillation cycle, being further perturbated by the two LFOs whose outputs almost freely flow to ground, thus using a good part of the scarce current. This produces randomly repetitive sound patterns not unlike the squeak of a giggling turkey…
Another feature is to switch off the power supply altogether, allowing the huge electro capacitor that is on the power path to discharge slowly, creating more weird sounds and chaos as it goes empty.

To make things clearer, an

audio snippet
(although with too much reverb) might help. Sorry, can’t embed at this point.

And here’s our blacblobbish layout for the circuit:

And the bare design you can print and etch and build your own! 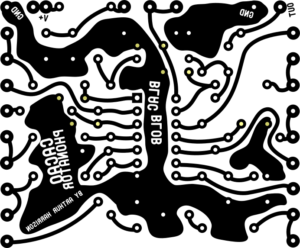 The prototype looks like this (it has a mistake which has been corrected on the layout above). The placement of the pots is a bit silly to start with… oh well.

(The output is really loud, hence the volume pot  before the output jack to help tame down things…)

Of course like always it’s even more fun to experiment and go further with this circuit. Here are a couple of possibilities among others to guide you (from a drawing by my lazy self, note that the component values are, ehm, special): 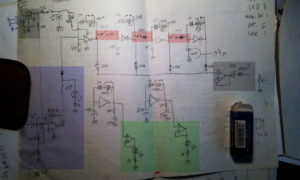 · In red: syncing diodes between the oscillators, turns the Cacophonator into a kind of drone machine.
· In green: just for kicks, put LEDs to them LFOs!
· In blue: an iteration of the much debated audio input. It did kind of work, but YMMV.
· In grey, right: an output buffer can be a good idea. Put there a 386 amp and you can drive a speaker!
· On each oscillator: contacts for fingers to modify pitches and stuff.
· In grey, upper left: a voltage regulator can help with buzzes – for your safety INCOMPATIBLE WITH FINGER CONTACTS!